First State Bank & Trust Co., which has locations in Larned, Pratt, Overland Park, and Iuka, attributes its longevity to dedicated people and a commitment to quality.  The Bank is rated as a 5-Star Bank (the highest ranking) by BauerFinancial, and is listed among The Strongest Banks in the U.S. by Weiss Ratings. 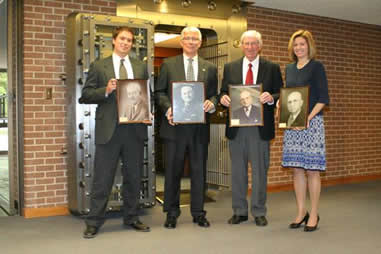 On June 26, 1896, a Larned, Kansas newspaper (The Chronoscope) announced the opening of the First State Bank and wrote, “The gentlemen connected with this new enterprise are among our most prominent and careful business men, which is a guarantee that the business of the bank will be conducted in a careful and conservative manner.” It went on to say, “the following named gentlemen were elected directors: Timothy McCarthy, F.D. Lowery, L.A. Choat, H.M. Halloway, and E.E. Frizell.”

On July 4, 1996, First State Bank celebrated its one hundred year anniversary in Larned by hosting a community wide celebration with a reception, a free concert by “The Little River Band” and a spectacular firework display for the over 5,000 in attendance.

In March 2007, First State Bank received regulatory approval to open a branch at College and Metcalf in Overland Park, Kansas. Leigh Briggs serves as Bank Center Manager of this bank.

Continuing the traditions of quality customer service established when the bank first opened its doors; First State Bank looks forward to helping enhance the future growth and prosperity of all its customers for many more years.